The road ends, but the journey continues...

It’s been 2 weeks since my latest ToDoTuesday post. It’s nice to be back for a check-in. Thanks, Roseanne for sponsoring this opportunity to participate each week!

My creativity trinity* is as follows: fiber art – MUSIC – writing. Each is intertwined with the other, offering needful respites between projects which in turn aid in the completion of various Works-In-Progress as new perspectives appear from such respites. Ultimately, it’s all about the music but tracking fiber art Works-In-Progress is lots easier to communicate in such a setting as this – hence the linky-party connection.
(A Reminder of) My goals for the week of August 27th through September 3rd:

Ahemmm, all those 2-week-old items have check marks after them. Yes, they are Done!
As mentioned before, a dedicated post is forthcoming on the score-editing process, but for now, suffice it to say “Christmas Medley” is finished with another score-edit begun and close to being finished.

Notice the binding clips used to keep piece neatly rolled up during stitching?

As for the PFWHK. I discovered my favorite binding clips worked well in keeping this small project neatly rolled up while finishing the vertical quilting and adding the 3-D feathers to the piece.
The instructions on how to attach those 3-D feathers to the Pink Flamingo Body were spotty at best, so I devised my own method. Instead of pinning (as suggested) the stiff triangles onto the quilted thickness of the PFWHK, I used the ¼ quilters tape to hold them in place. Also suggested was to straight stitch them ‘close to the edge’.
Ick. 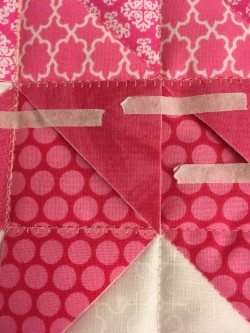 Instead, I used a blanket stitch. This covered the exposed raw edge of the 3-D feathers, adding strength as well as a more finished look to the overall application.
I have to say, I am thrilled with the way the ‘double’ batting experiment is unfolding. It handles well under the needle and is beginning to show promise as a desirable aesthetic (enough weight to hang well, with enough poofyness to show off quilting details). 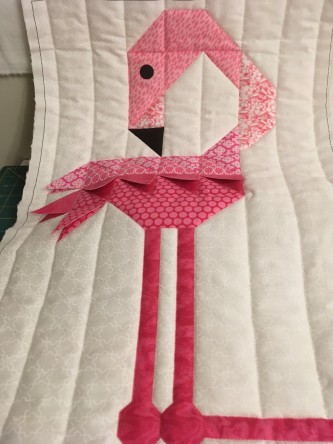 The PFWHK – ready for the final touches

*a term I invented recently

This site uses Akismet to reduce spam. Learn how your comment data is processed.

What are you looking for?

Theme by Anders Noren — Up ↑